I really feel like I have spent the better part of the last two years absolutely fascinated by the world of wheelchairs.

All in all, I have had four different models, and three of them I really remember. So, I will voice my opinion. I matter, you know. What I say is from a very educated place. I learded it with alls the boox.

I hate the electric wheelchair I had. Sure: It was comfortable and effortless. Somedays, I could venture about for hours and the only restriction was the fatigue I would endure from just being awake.

The problems really lay in the emergency breaks. They would activate randomly and the chair would sceze up until it was fixed. The area in question was literally impossible for me to fix on my own, and this would leave me to being stranded in awkward places for many hours at times.

Another great thing is that it would recline. I was having a circulation problem at the time, and the change in degrees would do wonders.

THAT IS IT FOR THE GOOD. 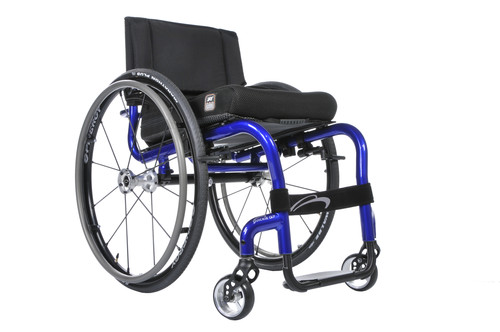 The next two chairs I had were just variations on the image above.

The first was pink, short, and had a taper for the main tires of about ten degrees. It was quick, loyal, and fun. It was only a loan, so I had to bid it farewell at some point. I was, however, clocked at 26 KM/h in it. I take great pride in that.

My current chair is a chair I own. Where there is blue on the frame in the photo above, mine is green. I also do not have the strap, by choice. Otherwise, that is identical to my chair.

I have not been clocked in the chair, but the lack of taper leads me to believe that I will not hit the same speeds.

I do own this chair. It cost me a pretty penny, but that means that I can get comfortable and reckless. There is a nice dent in the front of the frame, and the break applicators have started to fall apart on me. Otherwise, this chair is fantastic.

Worked retail for about ten years. Been in a wheelchair since November 2013. Doing my best to return to the life I once knew. Author. Married to Natasha Soulis July 14th 2017 View all posts by jmgard

This site uses Akismet to reduce spam. Learn how your comment data is processed.